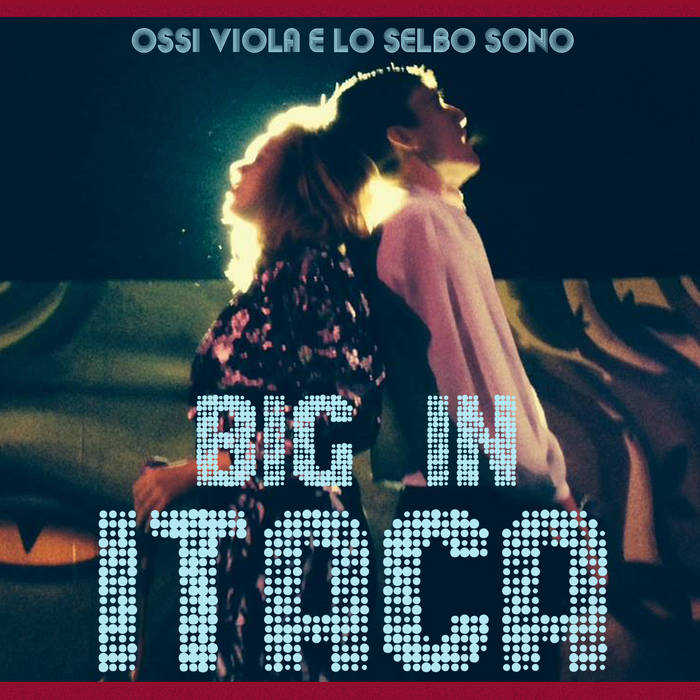 IMPOSE Magazine: "After Jimmy Turturici’s recent world tour, we were introduced in turn to Berlin’s Itaca, the duo of Ossi Viola & Lo Selbo. A pair of lovers who met in Rome, they make music that takes on Homerian proportions as they make music that presents the quest of their own odysseys toward the mythic land of their namesake, Itaca. Working in a kind of operatic synth pop, sung in Italian; we were smitten with their cassette Big In Itaca, with tracks from the opening “C’è vita in questa macchina”, where the mission kicks into high gear on “Continuerò”, the punchy beat dynamics on “Forse Forse Forse”, to the thriller realms of “Sanremo fantastico”. Itaca pushes to make a sort of synth-song world of their own that is “Bigger than Life”, bringing the emotion and the international pop on sparse grooves like “Ecco è l’acqua”, the metropolitan dramatics of”Entra nella città”, leaving you with the curtain closing “Ispirami”. Itaca’s Lo Selbo joined us for an interview round featured after the following listen.

I: Describe how the two of you met, and how you both arrived upon the formation of Itaca.

Selbo: Albertine and I, we’ve been a couple long before we sang together. We are both Berliners but for some reason met in the city of Rome. Much later Albertine decided to study in Rome and live there for a year. That’s when I made one or two songs in Italian fantasizing that I would visit her in Rome and take the city by storm. It turned out it was way more fun to do this and potentially deeper than I expected. So I worked really hard on these songs. And I lobbied Albertine to sing with me. Albertine is doing different styles musically, I play drums in her band, but her approach to music is very different than mine. I think it took two years to convince her to go on stage with me. The moment she did that I consider the first formation of Itaca. That was new years eve 2013 in a club in Berlin Ostkreuz. Our second formation was when we sang for the first time in Italy. I was in the summer 2014, we were afraid as hell to play in front of an Italian audience. It was a festival (Ostiapalusa festival) with hip hop, punk and metal bands, mostly from Rome. And here come the German guys with Italian lyrics and pop music. We were scared. End of the story is that there was a huge party in front of our stage. And the next night in Latina (city close to Rome) it was similar. Basically I decided to quit my other career plans after that and here we go.

I: Tell us about the inspirations behind the name, and the mythic like island of Itaca that is enriched in the music you make.

S: About the time I did the first songs Albertine and I we were reading Homer’s Odyssey. It’s like the period table of drama elements. I could totally relate to the stories in there. In our songs we often refer to names or parts of it. In a love song we would sing things like Ulysses had a great plan, but there was no market for it. Itaca is the Italian name for Odysseus’s home island and ultimate destination. The name of this destination also embodies things about Berlin and the DIY scene in the city. Like Odysseus, everybody here is planning some breakfast at Tiffany’s but somehow gets stuck at the cyclops’ table.

A minor reason to use this name was that a similar sounding word “itaka” is an old-fashioned term Germans used for Italians (“italienischer kamerad” = Italian comrade). It didn’t always have the nicest connotation, but its also used with some respect and I like the aggressiveness that comes with it.

I: Describe the Italo-German-Euro fusions at work in your sounds.

S: I think our music is mostly inspired by British and American bands. But when you sing in Italian, the language immediately has an impact on the melodies and the sound. Italian is incredibly rhythmic and beautiful and it forces everything in its way to gain style. just try and take your favorite track, translate it and sing it in Italian, you will be amazed what this language is doing. One of the reason for that is that 99% of Italian words end with an “e”, this is really a game changer in terms of melody. If we would sing our songs in German or English, it would be very different.

I don’t know if there is anything particularly German in our sound. we love Kraftwerk, we can fully relate to the european attitude of Kraftwerk, they are also one of the few German bands that sang their tracks in Italian. but my main influences are the Pet Shop Boys, Depeche Mode, A-ha, Yazoo, The Knife, Animal Collective, Deerhoof, Blonde Redhead, Queen, and the Beach Boys. When we started with Itaca we were not knowing a lot of Italian music, but there is some very very fine stuff that I got to know since then that really hit me deeply, like Krisma. Also Italy’s most famous Lucio Battisti or the songs that Morricone wrote for Milva, this is all gold, in my opinion anybody writing songs can profit from listening to this.

I: How do the two of you usually musically collaborate together?

S: We are a couple, and we are both a bit stubborn; for us generally it is not very natural to collaborate. Still we have mutual admiration for our music so we decided one should help the other. We have two bands, in one Albertine is the principal and makes the musical decisions and I just try to not get in the way best I can. The other band happens to be Itaca. so with the songwriting and melodies its basically me giving instructions and Albertine just doesn’t get them.

We do not rehearse, we practice singing in the car going to the gig. When we make and record the music, we are both doing it alone by ourselves. With Itaca it’s me sitting in a room without windows with two synthesizers, a guitar, a bass and a drum set. I do a lot of self-talking. These days Albertine is recording Ataca vocals for some new songs in her basement. Sometimes I visit her to bring a pizza, we talk about the song and five minutes later we fight. She has a drum set there too so we jam some krautrock to calm down.

In short I’d say our collaboration is not so much on specifics of music but more general: we help each other when we are having our downs after a bad day in studio or on even worse days when we didn’t make it to the studio in the first place. And we collaborate a lot more closely doing the booking, artworks and how to do the live show, the costumes, lights, etc. Albertine is looking a lot into different Berlin scenes, be it music or theater or dance; while I am mostly on YouTube at some Queen gig.

I: Please give us insights into the making of Big in Itaca.

S: Big in Itaca is a collection of our first songs. When I started to make it I was 29, I had never used a synthesizer before, and I had written hardly more than three songs in my life. I used to be a guitar player and drummer in bands, which where all dead by that time. So “Big in Itaca” is an account of me learning how to write a song completely on my own and how to use these electronic instruments, how to mix. I recorded it probably 15 times. I could do it way better now, but I decided to say goodbye to them and make new ones. So this is it. Most of the songs are written on guitar, and then I spent the summer in the studio to arrange them as electronic pop songs. This translation was a very complicated procedure, but I think you can hear that these are not tracks but real songs. You could probably do a flamenco version of them and they would still work somehow. The name Big in Itaca is a reference to the term “Big in Japan”, and it makes fun of the fact that nobody knows us but we act like we are fame. I am pretty convinced that we are big in Itaca.

I: What else have you two been listening to?

S: The last things I really enjoyed were Panda Bear’s Grim Reaper album, the album Love is a Fridge by a German pop-band called My and My Drummer, and one particular concert I’ve been to with two fantastic bands, one being Italy’s Sax’n Bass nerds “ZU” and the other the mega-entertaining sludge band “Arabrot”. I realized that lately Albertine is listening to a lot of “Chinawoman”. There is also some very fun new stuff of the Roman band “Lapingra”, they shot a whole musical on their own in which a gladiator supposedly falls in love with a Peruvian girl; I guess I don’t have to add anything to that…

Lights flash, fog spreads, those glitter heads lift their arms to shower in applause. They present themselves as Ossi Viola and Lo Selbo, on their odyssey to the island Itaca. She whispers to his ear. He begs on his knees. Their hearts are black like Livornese punch with a little whip of cream right in its center. ... more

Bandcamp Daily  your guide to the world of Bandcamp